With the increase in average life expectancy, we must put our eyes on the future and prevent and control the most common cognitive and motor diseases in older citizens. Healthier older persons, active and capable of facing the challenges of aging, are the main objective of the new Caritas Coimbra – ReHab project, financed by Banco BPI, under the BPI Seniors 2018 program.

The older population faces daily the consequences of the most common diseases in Portugal in this age group: Alzheimer’s, Cataracts, Parkinson’s, Osteoporosis, Diabetes, Cardiovascular, Cancer, Deafness and Depression. Portugal is the 4th OECD country with more people with dementia per 1000 inhabitants, according to the “Health at a Glance 2017” Report. Another major concern in the country is the feeling of loneliness, which, although transversal to all ages, prevails more in the elderly, related to widowhood, poor accessibility to health care, distance from urban centers and distance from the family. According to data collected by the GNR (Republican National Guard) in the Senior Censuses 2017, there are 45.516 elderly people living alone or in isolation in Portugal.

At the regional level, Rehab also aims to respond to the priorities identified in the Social Diagnosis of Coimbra regarding the “Elderly Persons” area. Insufficiency of equipment; the loneliness; the increase in longevity and consequent increase in dependence and cognitive and functional decline are the main focus of the project, directed mainly at people who are alone, who benefit from domiciliary support, also combating social isolation.

The various actions proposed will be implemented in 2019 by Cáritas Coimbra, with the support of the Pedro Nunes Institute and Fraunhofer AICOS. They will work on cognitive stimulation and functional rehabilitation individually and in a group, in an assisted environment and at home, making available for older people a multidimensional kit of innovative technologies and traditional materials. The instruments range from geriatric games to cognitive training games available on a tablet, through interaction with an avatar. Caritas caregivers will also provide remote support at the beginning of each session through internet connection and Skype service. Digital literacy sessions are also planned for the beneficiaries of the project. 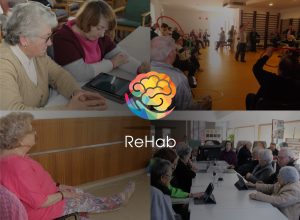