The Triplo D’s Mid-Term Conference was held on 16th June 2021 at Centro Pastoral da Lousã. With the theme “Challenges and paths: the construction of inclusive and participatory environments”, this was a face-to-face event that had 25 participants, including partners, stakeholders, and other interested parties, who gathered for a fruitful debate on the project’s themes. Triplo D is a project implemented by Caritas Coimbra and financed by the Active Citizens Fund (2018-2024), under the European Economic Area Financial Mechanism – EEA Grants, managed in Portugal by the Calouste Gulbenkian Foundation and the Bissaya Barreto Foundation.

Flávia Rodrigues, a member of Caritas Coimbra’s Innovation Department welcomed the participants in the opening session and took the chance to underline the need for Innovation projects to provide differentiated services and tailored responses to the needs of the different public. Ana Teresa Santos, a member of the Management Unit of the Programme Active Citizen Funds in Portugal, took part in the conference online and shared her enthusiasm for the path that the Triplo D Project has followed so far. Ana Teresa Santos highlighted the project’s commitment to fulfilling the Programme’s goals of strengthening civil society, active citizenship, and empowering vulnerable groups, even amidst the limitations imposed by the COVID-19 pandemic.

After the opening session, Ana Goreti Oliveira, Joana Carvalho, and Fernando Santos, members of the Triplo D team reflected on the project’s journey and the links between citizenship, human rights, and democratic participation. The team also shared important quantitative data, such as the number of sessions, participants, established partnerships and age and geographic distribution of the intervention. Furthermore, the team presented several project results, through photos, posters, brochures, materials created by the project participants, among others. Some of them were exhibited in the auditorium. After nearly two years of intervention, the shared message is that democratic activation is a long-term process, which must necessarily involve different layers of audiences, ages, territories, and contexts at the level of intrinsic empowerment, in a web that cuts across different realities.

The first panel of the session brought together representatives of the official Triplo D partners: Pedro Balhau – Director of the Lousã Group of Schools; Susana Alves – President of the Board of the European Institute for Cultural Sciences Padre Manuel Antunes; Eva Fabry – Director of the European Centre for Women and Technology and Nancy Brito, also representing the same entity. In general, the various partners made a brief institutional framework, reflected on the partnership and intervention carried out with Triplo D and the importance of the themes addressed for raising awareness and empowerment in democratic literacy and community activation.

The second panel focused on the importance of education, citizenship, and participation in building inclusive and participatory environments. It had the participation of Henriqueta Oliveira – Councillor at the City Council Lousã; Anabela Correia – Coordinator of the Citizenship and Development Subject in the Lousã Group of Schools; Ricardo Sousa – Technical Director at S. José Community Centre and Lurdes Marques, Social-Educational Animator at S. Pedro Community Centre, both Caritas Coimbra’s centres. 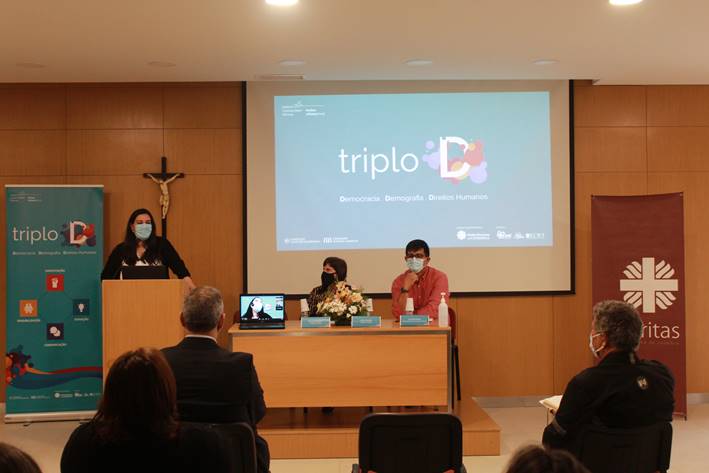