In 2014 Cáritas Coimbra took the first steps in working with social robots, through the GrowMeUp project, funded by the European Commission’s H2020 programme. This project developed a robot to support the needs of citizens over 65 in their daily life tasks. Enhancing the dialogue between the person and the robot, alerts for taking medication, scheduling activities, physical stimulation through games or videos and cognitive stimulation through memory games were some of the potentialities of the social robot that were tested in Cáritas Coimbra.

It can be said that this project stood out for the difference when it involved users in the whole development of technology from the beginning. The colour of the social robot itself was chosen by the users of the social responses of Nursing Home, Day Care Centre and Home Care Service in which the robot was tested. The participants were able to contribute with their opinions, in small meetings and workshops, held to debate and discuss their ideas.

Participants in the GrowMeUp project say they miss the robot that they have lovingly welcomed in their lives and recognize that they helped in its development. They often comment “we wanted Ambrósio to be around here” or “I liked my Hugo”.

With the GrowMeUp experience, it was possible to see an increase in motivation to practice physical exercise; greater adherence to the activities provided by the care services; greater social interaction; bringing families closer together; improving the quality of life; benefits for physical and mental health; stimulating dialogue; involvement with caregivers and researchers; keeping the brain active and inciting curiosity; facilitating access to information and increasing digital literacy. However, the technology still needs to be improved in order to be used daily.

Robots are increasingly being used, not only in the social sector, but also in the health sector as a potential solution for the present and the future. Based on this premise and with the objective of enhancing the technology that resulted from it, Cáritas Coimbra has since 2019 been participating in the LIFEBOTS Exchange, a project approved under the Marie Sklodowska-Curie Actions, funded by the European Union funding programme, Horizon 2020. It’s expected that through this a tri-sectoral network will be built, involving academia, industry and users of technology. The Norwegian University of Science and Technology (NTNU) coordinates the project, with the Portuguese partners being Cáritas Coimbra, Instituto Pedro Nunes (IPN), the Institute of Systems and Robotics of the University of Coimbra (ISR), IDMind – Engenharia De Sistemas Lda, and 8 more partners representing research institutions, companies and NGOs from all over Europe and South Korea.

Highlighting the existing collaboration between Cáritas Coimbra and IPN in the continuous development and maturation of new technologies for healthcare, LIFEBOTS has further strengthened this relationship. Through this project, Cáritas Coimbra lent Hugo to IPN, so that the partner can advance in its development and, thus, the robot can be utilized by Cáritas users again soon.

According to João Quintas, Principal Researcher at LAS – Laboratory for Automation and Systems at IPN – “Thanks to this action, now in Coimbra, it became possible to have three reference organizations (IPN, Cáritas Coimbra and ISR) working on the same platform technology, which is expected to boost the development and adoption of this type of cutting-edge technologies”.

Natália Machado, project manager at Cáritas Coimbra, also looks forward to the project’s future, referring that – “LIFEBOTS continued an important work started with GrowMeUp: research on social robots in the care of older people. The exchange of experiences between academia, industry and social organizations has given excellent results, as it focuses research on the needs and interests of the end user, with benefits for Cáritas users, leading to a differentiated and quality service.” 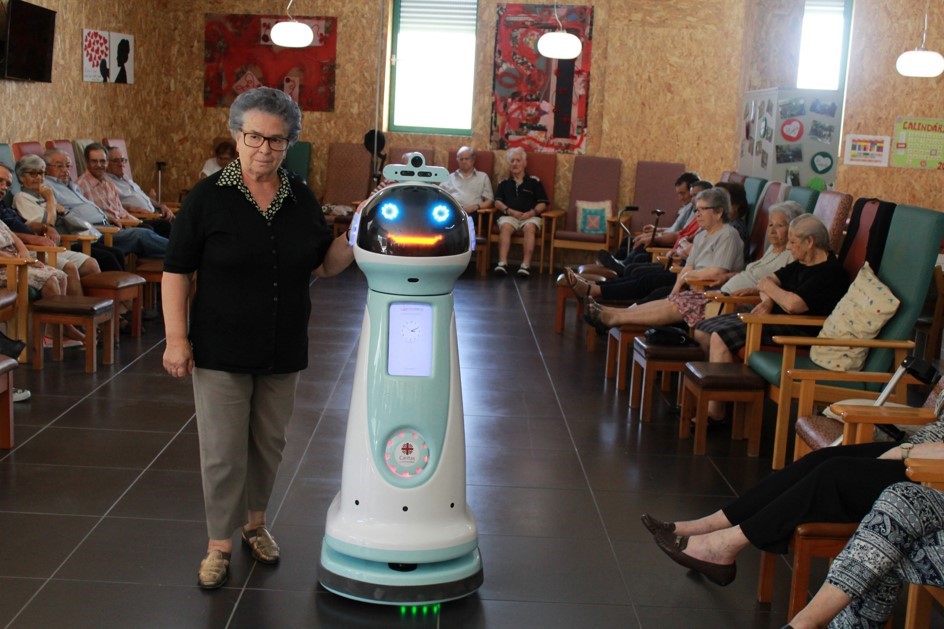